A growing number of countries are beginning to acknowledge that (EHS) electrohypersensitivity exists and a few countries have classified it as a disability or a functional impairment attributable to the environment. Epidemiological studies and in vivo experiments show that exposure to non-ionizing radiation (NIR) from extremely low to microwave frequency electromagnetic fields (EMF) at exposure intensities far below the maximum limits in international guidelines increases anxiety, depression, and physiological stress and impairs cognitive functions that include concentration, memory and learning. Furthermore, exposure to NIR contributes to neurodegenerative diseases including dementia, Alzheimer’s disease, amyotrophic lateral sclerosis, multiple sclerosis, Parkinson’s disease, attention deficit hyperactivity disorder and autism spectrum disorder. Exposure of the fetus to NIR (mobile phone) affects the neonatal heart and can lead to emotional and behavioral problems in human offspring. Similar exposures in laboratory studies report impaired cognitive performance, neuronal losses and pathological changes in the brain of rat offspring. The scientific and medical communities have repeatedly sent out urgent warnings, in the form of appeals, declarations and testimonies, that exposure to NIR needs to be reduced from a public health perspective. These warnings have been largely ignored. With continued development of wireless technology and the imminent roll out of new and densified technologies (e.g., 5G technology, satellite constellations, repeaters, wearables, Internet of Things), society will pay an enormous price for disregarding these warnings. It is long overdue for those responsible for public health, the health of children and health policy to take these warnings seriously and to provide a refuge for those afflicted by EHS. EHS is real, it is exacerbated by exposure to NIR, it is increasing among the population and when severe it becomes a disability. Action is long overdue to minimize exposure to
NIR and to provide a safe environment that all can enjoy.

Introduction
With each new product, technology or development comes the potential for a novel health challenge that may not have been foreseen. This was the case with asbestos, leaded gasoline, tobacco and x-rays and is now the case with non-ionizing radiation (NIR). The scenario is virtually identical for all of these products. A new technology is discovered (e.g., x-rays) or novel uses for an existing product are promoted (e.g., lead in gasoline). It becomes popular and is widely used, resulting in a greater population coming in contact with the “element”. A few people (or animals) become sick following exposure. Initially, the early warning scientists and medical doctors, who recognize the culprit, are ignored. As the body bags accumulate and the statistics improve, the naysayers and the doubt promoters become less convincing. After one or two generations have passed and the old guard is replaced with new blood, policy to protect public and environmental health is eventually implemented. The environment and those still living begin to heal.

The purpose of this report is to provide scientific evidence documenting the effects of non-ionizing radiation (NIR) in the form of electromagnetic fields (EMF)
(a) and electromagnetic radiation (EMR) (b) primarily as they pertain to cognitive and physical impairment of persons, leading to symptoms consistent with electrohypersensitivity (EHS) and symptoms that are considered a disability in some countries and some jurisdictions. Scientific studies are provided that document
an association (human epidemiological studies) and a cause-effect relationship (in vivo animal studies) with different types of electrosmog (c) exposure ranging from
extremely low frequency electromagnetic fields (ELF/EMF)–associated with the generation, transmission, distribution and use of electricity–to microwave radiation (MWR) generated by our use of wireless devices including cell and cordless phones, cell and cordless phone base stations, Wi-Fi, bluetooth, smart utility meters, smart
appliances, electronic equipment, etc. Increasing Exposure to Non-ionizing Radiation (NIR).

Our exposure to NIR has increased dramatically since Nikola Tesla harnessed the power of Niagara Falls and electricity flowed along wires, bringing light into homes and electric power to cities. Alternating current (AC) at 50/60 Hz was soon followed by radio, radar, television, cellular telephones, Wi-Fi, smart meters, smart appliances, smart homes and smart cities–with “smart” referring to devices that are able to receive and transmit digitized information and thus communicate with one another and can be controlled remotely by phone or Internet or other network connections. At the urging of the telecom industry, governments are making available higher frequencies
(millimetre waves, 30 to 300 GHz, https://spectrum.ieee.org/video/telecom/wireless/everythin
g-you-need-to-know-about-5g) of the electromagnetic
spectrum for the 5
th Generation (5G) technology and the
Internet of Things (IOT).

Although, at the writing of this paper, frequencies not in the millimetre part of the
electromagnetic spectrum are being advanced as 5G technology. While 5G can include frequencies from 600 MHz to 6 GHz, these lower frequencies are only slightly
faster than 4G and are not millimetre waves (mm waves)

I suggest viewing the remainder of the original document at the link below: 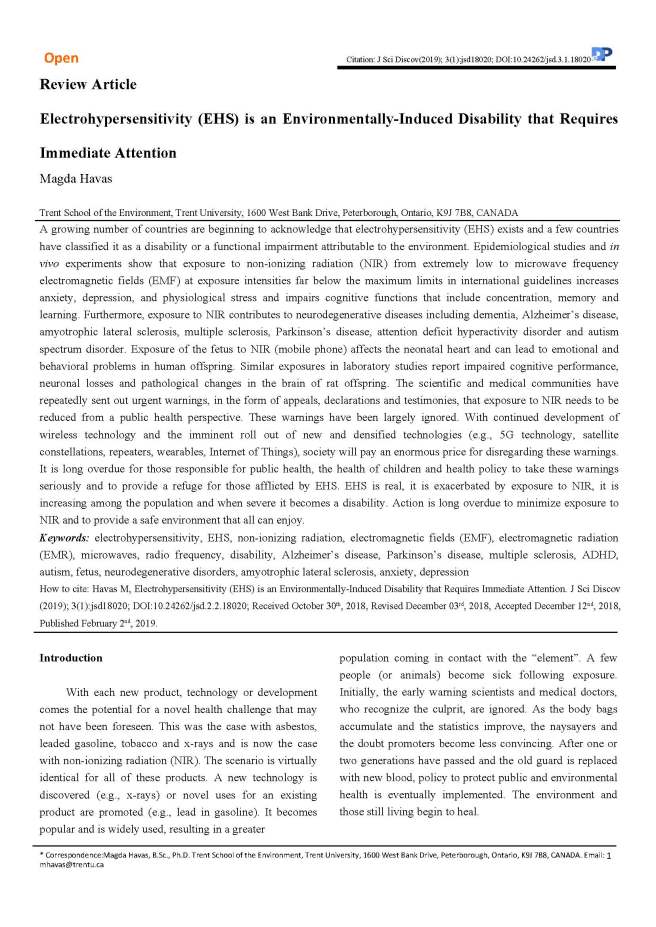 I had written a book about how I reversed several incurable diseases when a host of doctors had no clue; how I had canceled all my medical appointments and started chasing GOD down for answers and what happened when He showed up. About 18 months after publishing the book I touched the screen of my new iPhone 5C (upgraded from a 4) and a pain shot up my arm that changed my life. Nobody told me this wireless technology is microwave radiation. Children are playing with these now. Adults hold them up to their head and put them in their pockets and bras. Wi-Fi is microwave radiation at 245 Billion Cycles per Second flooding our homes, offices and even the coffee shop. All of this causes cancer! Time to get informed and get active! They limit children buying tobacco but you can play with a microwave radio. smh View all posts by kb108